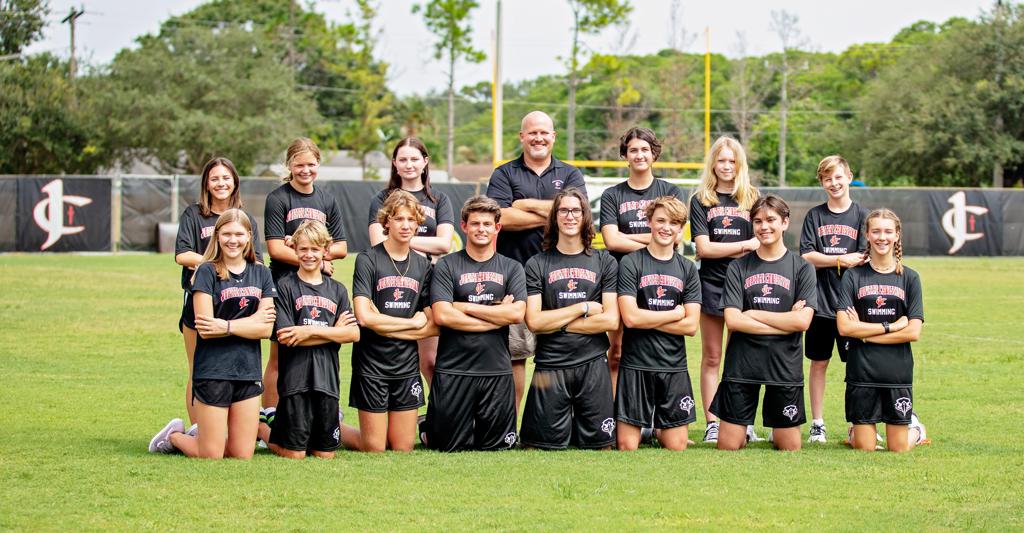 The Eagles defeated Edgewood High School as the lower seed in Tuesday's Regional Quarterfinal Matchup! They advance to the Regional Semis where they will have a District Championship rematch vs. Benjamin. The game will be Tuesday night at 7pm @ Benjamin. LETS GO EAGLES!!

The Boys' Golf team season came to a conclusion on Tuesday in their District match. The boys had a great season and have much to look forward to!!  Congratulations to Coach Silvestri and the team on their many accomplishments this season.

MS Boys played their first pre season game Thursday @ All Saints and lost a close game 1-0. Next game is Tuesday at Atlantic Christian at 4pm.

Varsity Volleyball became Districts runner ups! They advanced to the District Championship game vs. Benjamin where they fell 3-1 after defeating John Carroll in the semi final match. They travel to Edgewood High School in Merritt Island for Regionals on Tuesday at 7pm!

Jupiter Christian Swim Team started the State Series at Indian River State College for the District meet. Eagle swimmers came out fast in the first event, the 200 Medley Relay. The Girls Relay (Carpenito, McNeely, Meinke, Amersi) finished 2nd, while the Boys (M. Young, Pinera, K. Young, Howard) captured first place for the 1st of what would be 4 District Championship swims. Clayton Pinera (100 Breaststroke) and Lily Amersi (50 Free) took home first place, adding District Champions to their already impressive resumes. Clayton Pinera broke his own school record in the event with a time of 1:07.41. Carly Meinke added 3rd and 4th place finishes in the 50 Free and 100 Fly. Sammie Carpenito and Logan McNeely had great races in the relays, and Matthew Young set two personal bests in the 100 Free (2nd overall) and 100 Backstroke (4th). The Boys 400 Free Relay (K. Young, Pro, M. Young, Pinera) finished the meet with yet again another first place finish with a time of 3:36.58, which also broke the school record by almost 4 seconds. Jupiter Christian Swim Team looks to bring this success to Regionals on October 30th in Orlando!

Men's Golf finished their final week of the regular season out strong winning both of their matches! They defeated Cardinal Newman on Senior Day 183-188 and Morningside Academy 186-161. Dalton Moore led the way Tuesday shooting a 36 and Will Keiley led Thursday shooting a 34. The Eagles begin Districts this Wednesday at Champions Club at Summerfield in Stuart.

Varsity Football defeated Bell Creek Academy on Friday 53-34. The Eagles have their first playoff game Thursday night at HOME vs. Legacy Charter High School at 7pm. Come out and show your support once again for the Eagles as they look to advance in the post season!

The boys golf team won both of their matches this week. On Tuesday, the Eagles shot 164 at Bear Lakes Country Club, defeating Cardinal Newman 164-179. On Thursday, the boys won 169-179 at home against Lake Worth Christian. The Eagles start district play the week of 10/25 and look to close out their final two matches strong this week on Tuesday and Thursday vs. Cardinal Newman and Morningside Academy.

Varsity and MS teams wrapped up their regular season in the South Fork XC Invite on Saturday morning. The Varsity Boys placed 8th out of 22 total teams. Top finishers were Dylan Webb and Jacob Stanton finishing in 16th and 17th places respectively out of 164 runners with times of 18:17 and 18:20

For the girls, Rebekah Ambrosius paced the team finishing 27th overall out of 110 runners with a 22:46 time.

The MS had another great meet where most of the athletes made PRs again!  This was a large and competitive JV meet. Top runners were Brex and Ada Robinson placing 19th out of 60 and 9th out of 40 in their divisions  with times of 23:44 and 23:47

Varsity will run in Districts next week on 10/26 at South County Regional Park.

Congratulations to our MS boys who beat Glades Day 30-22 on Wednesday to close out their season!

Varsity Football took down St. Edward's 56-28 Thursday night! They wrap up the regular season this Friday as they travel to Bell Creek Academy before their first playoff game next week. Playoff schedule is TBA.